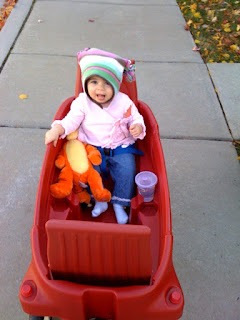 Fall in Virginia is absolutely gorgeous. This is our second southern fall, but I feel like I didn't get to really enjoy it last year - probably because for the first half I was 9 months pregnant, and for the second half I was on the couch with a newborn trying to get it together.
AJ got a wagon from her grandparents for her birthday, and today was the perfect autumn day to take it for a spin (or 5) around the block.
Now that she is a year old I'm ready to stop breastfeeding her.  That's what I keep telling myself anyways. When I first brought her home, it was always my intention to supplement with formula every so often - mostly to give myself a break. Well that never worked out for us. I have tried formula several times in her first year and my picky little peanut has always gagged on it. I continued to pump breastmilk and we tried to give her a bottle once a day until she was about 6 months and she decided she'd rather starve than take a bottle. Since I am a stay-at-home-mom and she always took well to the breast, I decided I would continue through her first year.

Around 8 months, as she began to eat more solids I would cut out several of her feedings and give her a sippy cup instead. She took to the sippy really well! (In fact, last week she graduated from a sippy with handles to a sippy without handles. I was watching my friend's daughter who is 3 and she had to drink like a big girl too!) At around 9 months I dropped her afternoon "snack" feed, and was now just feeding her first thing in the morning, before each of her naps, and at bed time (and sometimes in the night, to comfort those teething pains).

I think I am ready for be done breastfeeding. I'd like to have my body back to myself for a little while. However, I kept telling myself that she wasn't ready to wean, she couldn't handle it, etc.

Today I thought that I was taking a huge step by cutting out her feed before her morning nap. I was prepared for her to lie in her crib screaming, tears rolling down her cheeks angry at mommy. I was prepared to silently sob in the hallway while the guilt wrenched inside my stomach.

But... I put her to bed and she didn't even notice that she didn't nurse. She hugged me, cuddled up with her Sammy (seahorse) and went to sleep.

So now I'm realizing I'm the hold up. I do want to be done nursing, but I'm having such a hard time letting go! I never ever ever in a million years thought that it would be such an emotional journey. I'm so glad that I did it though.

I think my plan is to keep skipping the late morning feed for the rest of the week, and to cut out her afternoon feed next week. If anyone has any advice I'll gladly accept it.

I know that I don't have to stop nursing, and that many moms nurse well into the second year and beyond, but I do feel like the time has come for me to quit. We have had thrush numerous times, and a month ago AJ got her first ear ache, which led to her refusal of nursing on the left side no matter what position we try, so I'm beginning to look a little lop-sided! Haha.