July 27, 2010
It's no secret, I'm a control freak. I hate situations that I have no control over and often avoid whereabouts in which I can't manipulate the outcomes to my liking. This can be a good thing and a bad thing. At work, I did every project to perfection. I kept pushing people until things were absolutely right. At home, when I can't cure my daughter's diaper rash with the regular run-of-the-mill diaper cream, I call the pediatrician and become antsy when they cannot give me an immediate answer. Have any control freak issues yourself? Commiserate with me.

One thing that I am absolutely crazy about is the temperature of the air around me. I suppose I'm a little bit like Goldy Locks; it can't be too cold, it can't be too hot - it has to be juuuuuust right. Seriously. Or I will freak out. The following is story about my journey to temperature control bliss without having to harm my husband.

For a year and a half my husband and I lived on the 6th floor of a walkup building (that's no elevator for all you non-city readers) in the West Village of Manhattan. The building was so old that it used to be a tenement building. Needless to say, there wasn't any air conditioning. So, after trying to beat the heat for a solid month, we made a trip to Home Depot to purchase a portable air conditioner. It was roughly 60 pounds, rolled between rooms (living space and bedroom), and resembled R2D2 (which is what we proudly named it). 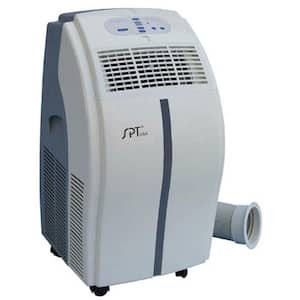 Eyesore, yes? But it worked, and we were blissfully temperature happy.

Oh wait. One thing. The air conditioner promptly turned itself off when it became full of water. It held about a gallon of water, which was great when it was humid, but picture this: You drift off to sleep under a cozy blanket, your air conditioner gently fanning you with the lowest of hums and lulling you to dreamland. Four hours later you awake drenched in sweat with no AC, and since you closed the windows to use R2D2 in the first place, the air around you is now stifling.

This is definitely the least favorite of my AC experiences, but when I think back on it I cannot help but to laugh. We promply passed on R2D2 when we moved to our apartment in Long Island City, and I'm not going to lie, it was kind of hard to say goodbye. After rolling R2D2 from room to room, dumping his water in the middle of the night, and sitting directly in front of him in the heat of the day, it was almost like saying goodbye to a pet.

Our apartment in Long Island City was an upgrade. Separate air conditioning units in the living room and bedroom. Unfortunately though they were comparable to the type you find in most hotels, with only three options: High, Low, and OFF. When it came to my preference, high was usually the choice. I would rather freeze under several comforters than be hot. In any case.

I couldn't have been happier when we moved to the suburbs and purchased a home with central air. Amen! Except for one thing. I was pregnant, and the battle of the thermostat was becoming a huge issue at our house. My husband would constantly be sneaking over and inching it up a couple degrees to see if I noticed. Of course I noticed, I was pregnant! Finally (and thank God I was blessed with such a wonderful husband) he just decided to suck it up, and spent most of his indoor time in summer 2009 wearing a sweatshirt and long pants. Thanks babe!

A few weeks ago my parents were due to arrive in less than two hours for a 4 day weekend and I suddenly felt hot. I could hear the air running, but I couldn't feel anything. Thermostat check. 74 degrees. But I had it set on 71! I began to panic. Luckily, a friend was able to fix it for us in less than 24 hours, which is pretty amazing in the Virginia summertime. But when the air wasn't working right I became a different person. I lost my head. I got upset that I couldn't fix the problem myself. I got angry that I was hot. I cried because I had no control.

What a blessing air conditioning is though, right? I'm sorry that I ever took it for granted, and I'm thankful every day that we have it. Since then, I've spoken with many more people, and it seems like the thermostat battle actually exists in most American homes. Does it at yours? What are you a control freak about?

My husband and I have since agreed that 72 degrees is a good compromise for airy bliss. He'd like it more at 75 and I'd like it more at 68, but meeting in the middle has proved to be working so far.  :)
control freak humor relationships