March 17, 2015
Life these days moves pretty quickly. For those who aren't looking for Him, it might seem like God isn't around anymore. It's hard to see Him in the troubles that this life brings. But He remains. He is always listening, and He is always interjecting in our lives in ways that sometimes we understand and sometimes we don't. But He is there. Seek Him.
A "God-wink" is an instance in which God had his loving hand in a moment that is so obvious that it takes our breath away. That's my definition, anyways. If you're paying close attention, you will notice these God-winks in your life. Here's one of mine.
The day that I found out that I was pregnant with my third child was not a good day. We had been traveling in Michigan for an entire week and on top of trying to divide our time amongst both sides of the family, and traveling with two toddlers who didn't like sleeping away from home, I was having these very strange hot flashes and moments of dizziness. I was stressed out, and I just wanted to be home.
On that day we had driven 14 hours from Michigan to our home in Virginia. My brain was fried. I was done. There was a bottle of red wine at home with my name on it if I could just make it there. It was right after the thought of wine that I wondered if there was any chance that I could be pregnant. When we finally made it back home, I took off again to pick up dinner and a pregnancy test. Just in case. Or let's be honest. Just because I didn't need one more thing to worry about that night.
After we put the kids to bed, I took the pregnancy test and was shocked to see that it was positive. Whhhaaaaatttt? This was supposed to be my negative-because-I-knew-it-would-be-negative-but-needed-the-extra-assurance-just-in-case test.
I told my husband right away and starting crying my eyes out. Ken said to me, "But isn't this what we wanted? Why are you crying? Everything is going to be fine."
My husband has a knack for being very wise in times of great stress. And obviously, he was right. We were planning on growing our family. It was just in that very long day and new pregnancy hormones that I just felt like I could not handle it and that the world was crushing underneath me.
It took my a little while to get used to the idea that I was pregnant. AGAIN. For the third time.
Do you know what happens when you're pregnant for the third time (or more)? People become downright rude.
"You're having another one? Why?"
"Was it an accident?"
"But you already have one of each."
"You know how that keeps happening... right?"
Within in a few weeks, my mood shifted from panic that I couldn't handle another baby at the current time to downright fear.
Fear that my ungratefulness for this new life would somehow get this baby taken away from me. That something bad was going to happen. That something just wasn't right. That I didn't deserve this blessing that God had bestowed on our family.
It obviously wasn't rational fear, but it consumed me. I cannot tell you how many hours I spent laying around counting baby kicks, paying too much attention to every gurgle and ache my body had. Instead of enjoying the miracle of having our daughter growing inside of me, I was too busy worrying about the 'what-ifs.' Instead of being thrilled to have ultrasounds done, I was terrified that my husband was unable to come with me, because I didn't know if I'd be able to handle any bad news on my own. I was a wreck.
One Sunday, about 6 or 7 months into my pregnancy, everything changed. I was wiggling in my pew at church, obviously uncomfortable and worried. My husband knew my worries. He squeezed my hand and smiled. When it was time to go up to the altar for communion, I went forward and bowed my head at the railing the same way I had done so many times before.
This time, however, our church Rector Chuck put his hand on my head and he began to pray over me.
I cannot tell you what he said. I don't remember. I did hear the words sister and pregnancy and baby and birth, but all I can tell you is that at that moment I was completely consumed with waves of relief. I could feel God's presence washing over me. And when I sat down, I knew that God was with me, that He was for me. That I had this. I didn't know what would happen next, but I knew that it was in God's hands and that everything would be OK.
And from that moment on in my pregnancy, I was able to embrace the goodness and be happy. The fear was gone.
Shortly after our daughter was born, I shared this story with our rector and his wife. I knew it was not unusual for a rector to pray over someone at the altar. Our other rector, Mario, had done so over me when I was preparing for to be induced for my son's birth. But this moment was just amazing. That he was compelled to do so at that moment, and how it changed so much for me.
God is with you, always. If you allow Him to show you His presence, He will. 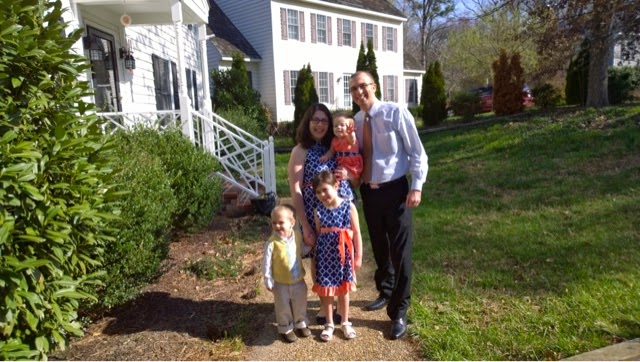