I'm not me when I'm not writing

I'm not sure... but my children keep multiplying. First there was one, and now somehow there are three. Beautiful Amelia, 5 years old. Light of my life. Will be going to kindergarten in the fall. I'm not sure whether to cry or throw up. I cannot believe how fast five years can fly by. Tristan. He will be 3 in two weeks. Not yet potty trained. He's trying but stubborn as a mule. He told his father that pooping in his diaper makes him happy. That's correct folks. My son literally said that crapping his pants brings him joy. Sorry little man, but it's about time that you enter reality. A reality in which you stink... you seriously stink and everyone knows the smell is coming from you.

Someday, my entire house will not smell like human waste.

Do you ever think that you've got your act together, only to return home after running errands and realizing that your whole house smells like POOP? That it must have smelled that way for days and you just didn't realize it because your nose was so used to it? That during those days you had actual human guests come to your house that must have smelled the poop but were too polite to say anything?

That's pretty much what having three young children is like.

Sweet little Harper. Planned but not planned so soon. Ten months old and the sweetest little baby in the entire world. I know that parents aren't supposed to pick favorites, but her dad and I know that she has been our favorite baby-wise. She is easy going, happy, hilarious, spunky. When my children are grown and they ask who was the best baby, the answer will be Harper. No sweet "Oh you were all lovely little dears." It was Harper. She was the best baby. Don't judge me.

Anyhow. I'm back. Or I'd like to be back. I obviously can't prove anything with a single post. The think about blogging is that it is extremely personal. It's pretty much what's in my head at any given time.  Then some.

What it became... back when I decided to take a hiatus, was something that I was not. I was getting paid (minimally, y'all) to write about stuff that I didn't care very much about. It was becoming less and less about me, and more about... junk. Hear ye, hear ye, come read some thing I've been asked to plug and then praise me for how glorious I am.

Meh... I guess it works for some people. But I'm not going to fill my blog with nonsense, or ads that are placed that you will accidentally click them and I will get paid, or sob stories begging you to purchase through my affiliate links.

But I do need to write. It's what I LOVE to do. And if I am not writing, there is just something that is just missing. I'm lost in my own mind. The words are there but they have nowhere to go. It's like yelling in a cave with constant echoes.

New Year's Resolutions are cliche, so that is obviously why I waited until January 6th (Epiphany, y'all!) to write this post. Either that, or I'm just behind. You can decide for yourself. One thing I'm really excited about this year though is becoming more organized. Like, getting my act together. I might even blow dry my hair a few times this year.

My husband helped me make this awesome menu board for our family. Please don't judge the incredibly simple meals... this is our first week! And on Day 2, I can say it's going splendidly. Who would have thought, that as long as the words were there on that board, that my children would stop fighting over what I should be feeding them and just go with the flow? It's been amazing. More to come. 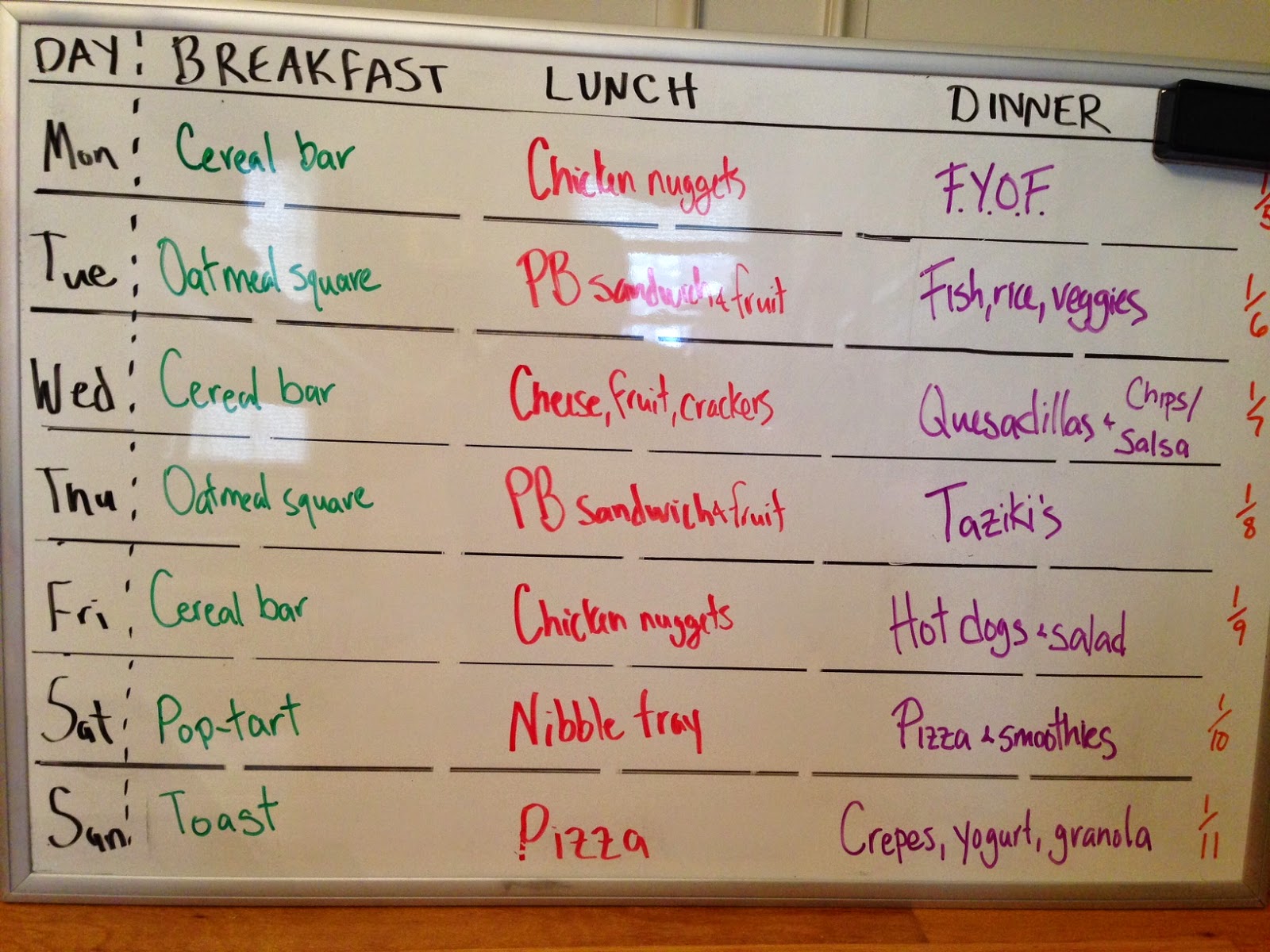 In case you were wondering... FYOF is Find Your Own Food. Mondays are a little chaotic around our house and Amelia has gymnastics in the evening, so we're just keeping it real. We have family dinner the other 6 nights of the week.

And yes, I do still allow my kids to eat Pop Tarts. But only on Saturdays. And sometimes they eat the organic ones.