Pregnancy Mind Games (Mixed feelings about finding out you're pregnant)

December 13, 2011
As if the physical toll of carrying a child isn't enough, the mental toll that pregnancy takes on a woman is almost downright hysterical when you think about it. At 34 weeks pregnant now, today I'm feeling (or at least for this moment) level-headed enough to share some of my chaotic with you.

When I got pregnant with our daughter in 2009 it pretty much came as a total shock. My husband and I had decided that we were open to having a child but that we weren't going to necessarily try to have a child - yet. I don't know what literature we had been reading, but it was clear to us that even the healthiest, normal couples could have to wait up to two years to conceive. We decided to give it six months and see where that took us. Three weeks later, I was pregnant.

My first symptom was complete lack of energy. It was a Friday in New York City, and happened to be my last day at a job that I loved and was leaving for life in the South with my husband. My brother-in-law was to be arriving that night at around 10:30pm to spend the weekend with us, taking in some of the sights before we left the Big Apple. But for some reason, the night owl in me just could not stay awake to welcome my brother-in-law. My husband also thought this was very strange, because we were the types to stay up to at least 11pm on weeknights and often well into the wee hours of the morning on the weekend. I took it as a sign that I had just had an emotionally draining day, and went to bed.

The whole weekend I was just as tired, but somehow I powered through. It was actually when I was sitting on the couch Monday morning waiting for Joe to make his way to the airport and Ken make his way to work that I had that thought - Could it be? No... well how can I be sure? I guess it's possible. But seriously, no. 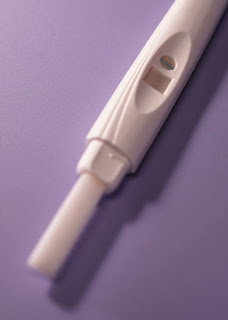 Arguing with myself is always a sure sign that I'm being mental, so as soon as the boys had left I quickly threw on some clothes and half-jogged my way to the Duane-Reade two blocks away, where I promptly purchased a pregnancy test (and a few other items, because as any girl knows it's much less awkward when you're checking out and a pregnancy test is just part of your transaction and not THE transaction) and ran back home, where five minutes later I was greeted with a big, fat, clear as day + sign.

I've wanted nothing more than to be a mom in this life, and now I'm getting the opportunity!

This is such exciting news! But seriously, you're not supposed to tell anyone for how many weeks?

Wait a minute. This is for real. Really?

It could be wrong.. these tests are wrong all the time.

Or are they only wrong when they say negative and you really are pregnant. Is a false positive even possible? ... the box says there is a chance. Hmm.

Well this is weird. Now what?

Crap. I am pregnant. We are going to have a baby.

So it just happened a little sooner than we thought it would, what a blessing.

NO! How could God possibly think that I'm ready to be a parent. I can't be someones parent - I have no idea what I'm doing!!

We're going to have a BABY!

Also in this time I was plotting on how to tell my husband our news. Do I tell him today? Do I wait awhile - what's the protocol? I didn't have any cutesy ideas for sharing the news... was that a requirement? I had been carrying the test stick around with me the majority of the day (as proof, I suppose... it's not like I was going to forget) and when I heard my husband wiggling his key into the lock I swiftly jammed it between the couch cushions.

To be honest, I don't know what happened next. There was nervous, giggly chatter from me and somehow I ended up pulling it out in a ta-dah fashion. We sat there shocked for a few moments, at which point my husband left to go to Duane-Reade for a back-up test.

He came home with a 4 pack of pregnancy tests and a pint of Ben & Jerry's. :)

I took two more tests that night (both of which were positive) and just to be certain, one test for each the following two days. I'm not going to lie- it took a few weeks to wrap my head around things, but that ice cream was the starting of our celebration. Life (almost three years later) has never been the same as it was before that day, but it's also never been better.

The second time around was much less shocking and more celebratory from the very beginning, and now we are less than a month and a half away from welcoming a baby boy to our family!
fun personal pregnancy