My Toddler Thinks that Matt Lauer is her Daddy

October 26, 2011
After the last couple days we've had at our house, I think it'd be therapeutic for me to write about something light-hearted. After I get my whine out, of course.

I don't know why, but I find pregnancy to be pretty stressful. I feel like I'm always on my guard and on-edge about something. Right now there is a little boy just north of where I live who has been missing in the woods since Sunday. Four days. Over a thousand people searching. Temperatures in the low 40's overnights. Oh yea, and he is autistic and non-verbal, meaning that he is unable to call for help. This, of course, is news that I would follow as a concerned citizen. But as a mom? I'm practically obsessed. I find myself checking the news every 15 minutes or so to see if there has been an update. Have they found him yet? I'm extremely hopeful, and my family and I have been praying for his safe rescue, but the whole situation has a lot of people on pins and needles. If you're interested, you can find more on the story here: NBC12.

That and my daughter is sick with the croup. And it totally breaks my heart. Her coughing started yesterday during the day, and I am so happy that my husband (who was also home sick) and I decided to take her to the pediatrician. Had the doctors not prepared us for what the night would be like (which we learned with croup is often much worse) I think we would have been in a definitely panic in the early morning hours this morning.

My husband, knowing how stressed out I am, still snuck to the store last night and brought me home white roses and cupcakes for our anniversary (which was yesterday). When I had mentioned that our daughter was sick on our last anniversary as well, he told me that it's just God's way of reminding us that it's not the anniversaries that count the most, but all the days in between. My husband is gifted to have a way with words like that.

Alright, onto lighter things, and as to what prompted my husband to post this onto Facebook last night:

It's true. It started a few days ago when I was looking online at one of the "Where in the World is Matt Lauer" promotions from the Today Show and my daughter ran over and exclaimed, "Daddy! Daddy! Daddy!!" My husband, thinking it was a fluke, pulled up another picture of Lauer yesterday while he was home and asked our daughter who it was. Again, "Daddy!!"

What makes it more hilarious is that while my husband and I were living in New York City (pre-kids) at one point I had mentioned something to the tune of how I think Matt Lauer has the coolest job in the world, which led to my husband to assume that I have a mega-crush on the guy, which I don't. (Sorry Matt, but you're old enough to be my dad.) Since then it has always been an ongoing joke in our house. Would my husband ever live up to the standards I've set for him through my adoration for Matt Lauer?

Ken- I wouldn't change a thing about you and our life together. It's perfect!

So what do you think? Must be the hair? 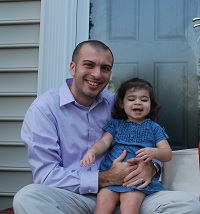