Showing posts from September, 2011
Show all

Going Home & Finding Freedom from the Past

When I was a young girl I came across a journal of my great-grandmother Sophie, mostly written in the 1920's when she was staying home with her young children. I thought it was amazing. The journal was mostly a log of the day-to-day activities that she did, and much of it was illegible because it was written in both pencil and that perfect age-old cursive that doesn't really exist anymore. Some time after that I decided that   I needed to document everything that was happening in my life, so that I could properly pass it on to the daughter that I would have someday. From the time I was 13 up through my 18th birthday I was a diligent journal writer. I filled books and books with my daily ramblings, all which I kept locked in the top drawer of a filing cabinet that I kept in my closet. After years of coming home and forgetting the key to that little drawer, when we went back home to Michigan two weeks ago I finally remembered it. And, wow. There really aren't any other
1 comment
Read more 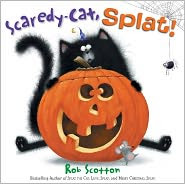 How often do you read to your children? It's no secret - The Children's Reading Foundation has been stressing the importance of reading to your child for 20 minutes every day. The listening and language skills learned as a young child help set the tone for those first years of school, and it's a great time to bond as well. My husband and I read to our daughter for an average of 40-60 minutes a day. Not all at once, of course, but she does like to read for 10-15 minutes before both nap and bedtime, and we also take 5-10 minute reading breaks throughout the day. It's been a part of her routine literally since she was born, and I'm certain that it has helped develop a love for books and a comforting activity to do with mom and dad as well as alone. Some Tips for Reading to Your Toddler: 1. Seasonal books are a great way to get your child ready for the holidays. However, they don't need to be kept for only those special times! Some of our favorite books are Ch
4 comments
Read more 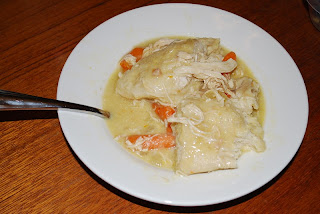 Chicken & Dumplings. One of the staples of American comfort food (in my book anyways). Check out this super easy Crock Pot version of an all time classic: recipe courtesy of my sister in-law Marie. We've started a new tradition at our house - Crock Pot Wednesdays. With my husband at school three nights a week and me running every which way with our almost two year old daughter, it's important for us to share meal times as often as possible. Having a Crock Pot makes wholesome meals (ie not frozen pizza or macaroni and cheese) possible. Check the bottom of this post for more Crock Pot recipes! Crock Pot Chicken & Dumplings: Ingredients: 1 can cream of onion soup 2 tablespoons of butter 3 chicken bouillion cubes 3 large boneless chicken breasts 1/2 pound of baby carrots (about 30-40) 3-6 stalks of chopped celery depending on your taste 1 small sweet onion or yellow onion 1/4 cup flour Enough water to cover all ingredients (I used just over 2 1/4 cups) 1 can reduced
2 comments
Read more

Yoyo.com is Here! It's Santa's Workshop Online - So Exciting!

Sometimes I think that the folks over at Diapers.com can hear my inner thoughts. Like when I wished I could order things for our household along with those much needed diapers, like toilet paper and kitty litter. And then again when I wished for toys... so many toys that I wouldn't have to go to a single store for my birthday and holiday shopping. Introducing Yoyo.com : YoYo.com is the toy store you've wished for – helping you save the day with last-minute birthday gifts, pointing you to toys that teach and entertain and giving you ways to strategically tackle your holiday gift list. Here you'll find a well-organized site with more than 20,000 toys, from the season's must-haves that everyone's talking about to tried-and-true favorites to hard-to-find specialty items. Plus, we've got quite a few tricks to show you. With our YoYo Picks,Super Filters and Top 10 Toys by Age, you'll always find the perfect present and toy. - "About Us" - Yoyo.com s
Post a Comment
Read more

Blasted Retail Emails - Unsubscribe and Empower! {...and my weakness secret}

September 07, 2011
My inbox currently has 365 unread emails. This isn't uncommon, as it usually takes me all week to sort everything out and start emailing people back. I'll admit, it's probably one of my flaws. When I was working as a "big-time" executive assistant in New York City, I was known for my instant email replys, as my Blackberry became almost another organ that I couldn't seem to function without. Since becoming a stay-at-home-mom, I still tend to read emails immediately, but I almost never have the brain power to summon up a reply right away. I attributed it to baby brain for the longest time. When my daughter turned 18 months it wasn't a very good excuse anymore, so I guess I had to go ahead and get pregnant again. Now I have actual brain fog so it's worse. Don't let anyone tell you differently -- having kids will only make you stupider. (Yes, I'm aware that stupider isn't a word... it's part of the joke. Get it.) Anyways, of those 365 e
1 comment
Read more
More posts