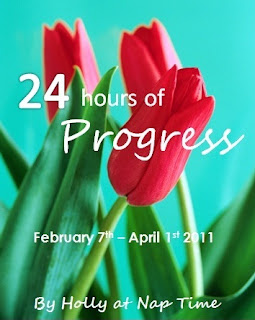 About 24 Hours of Progress:


So often, the only projects that get "done" around our homes is dinner (and no, takeout doesn't count) and the laundry. Out of necessity though. There are so many little nagging projects that linger for most of us. Yes, we can live with a little clutter here or there, but it sure feels good to get those little things out of the way!

Spring is a natural time of rebirth and shedding the layers that has descended upon our house over the winter. The Holly at Nap Time series 24 hours of Progress is designed of 72 household projects that will take on average about one hour to do. Pick one project each Monday, Wednesday and Friday to work on from now until April 1st. By the end of the session, you will have made 24 Hours of Progress towards the home you deserve!

I realize that I'm behind on the 24 hours of progress. Sometimes I get so excited over a series that I forget that "real life" also has to happen at the same time. ;) Good thing I make the rules here.

Clean Up Your Flowerbeds: I'm really not much of a gardener. Not because I wouldn't like to be, but because I simply don't have the time. So last year when my husband and I landscaped the backyard (which was previously just a mud pit until we bought the home, we decided that we'd put in some hardy, self-sufficient plants. So far so good, I think that everything is still alive. But just because a plant is hardy doesn't mean that it doesn't need any attention, especially if you don't want your backyard to look like a jungle. Take an hour to clean out any weeds that may be coming in, pruning that needs to be done, etc. Your neighbors will thank you. ;)

Read a Book For Pleasure: This Spring cleaning task isn't for your home, it's for your brain. Yes, folks, dormant brains can get mental cobwebs too. Ever pick up a book after a long absence and feel like you don't know how to read anymore? After I had my daughter I became such a s.l.o.w. reader. I felt like my brain couldn't hold the mental capacity. Granted, there is some truth to the "Baby Brain" theory, but it certainly didn't mean I no longer had the capacity to read a good book and keep up with book club. Reading is important for keeping your mind sharp. In fact, that's why these days senior centers have loads of activities for their residents to be involved in. An active and stimulated brain is less likely to suffer from dementia and other related problems. So pick up a book. It's a healthy thing to do! For more information, read this article from TIME on Staying Sharp.

Use It or Lose It: You know what I'm talking about. You have 20 coffee mugs but always use the same two or three. Are you ever really going to have a use for 20 coffee mugs at once? Use it or lose it. Those little dessert plates that with the handpainted flowers on them that are too pretty to use - aren't they also too pretty to be stashed in the back of a cupboard? Use it or lose it. Decluttering your kitchen cabinets can be a difficult task. As humans, it is our nature to like the things that we own and want to hold on to them. But if we simply aren't using them, isn't it better to let them go? There are many people in the world for whom our abundance of items can help, and yet somehow it is the most natural thing in the world to stockpile items and keep them tucked away as our own. This isn't what God wants for us though. After all, these worldly items aren't going with us after we die! In Matthew 6:33, Jesus tells us, "But seek first His kingdom and His righteousness, and all these things will be given to you as well." Use it or lose it. Call it my anti-hoarding campaign if you like, but it's time to part with the items that you aren't using, so that someone in need might be able to find good in them.

I thought that I was the most thoughtful and clever wife in the world a couple years ago when I purchased my husband a subscription to the Wall Street Journal for his birthday. He was thrilled. I was also thrilled at his happiness, until he told me his intent to save each paper, it an attempt to track the history of the major business world. As the months passed by the papers piled up and it made me sick to my stomach to see so much of what I considered to be a waste of space and a huge fire hazard. I encouraged my husband to recycle the papers. Was he ever really going to read them again, or were they just going to take up our attic space and pose a threat to the flammability of my  home? It took a literal mountain of papers (which happens when you've had a daily subscription for over a year) for my husband to see my point. No, he wasn't going to go through these papers in their entirety ever again, and no... the cover stories couldn't be of any significant value in the long run. So what he did (and I'm so very thankful for this), is he took the time to skim through each of his saved papers. If there were any significant articles that he wanted to hold onto, he put them aside, and the rest is recycled back into the newspaper making world. Our current stack of newspapers is very slim and a nice reminder that we don't necessarily need all of the items that we posess.
24 Hours of Progress

Wow! In the last year the Elf on the Shelf's popularity has sky-rocketed across the US. Santa is sending out elves left and right to keep an eye after all the little boys and girls and make sure they are good this holiday season. We were so pleased to give away an Elf on the Shelf to a lucky Holly at Nap Time reader earlier this holiday season. I really wish that I had 400+ elves to give away to all those who entered, but if you don't already have an elf, I can assure you that the $30 is a great investment. To learn more about Elf on the Shelf, click here . My daughter is only two years old, and this is our first year with our Elf, Sam, so his hiding spots and antics are pretty obvious and don't really tell much of a story. My friends with older kids, however, are getting pretty creative, and moms all over are sharing their ideas on Pinterest , which begs the question: Is Elf on the Shelf more fun for children or parents? I'll leave that up for you to decide. So
Read more