August 26, 2010
One of my biggest weaknesses is that I am a creature of habit. Often when I go to a restaurant for the first time, I will order something I've had before somewhere else. And... rest assured I will probably order the same thing every other time I go to that restaurant for the rest of my life.

Ok - maybe I exaggerate a little bit, but  my habitualness is pretty bad. So when it comes to cooking dinner for my family, I pretty much rotate among the same 10 dishes that I know and love. If we try anything new, it's almost certain that my husband made it. He's good at creating new concoctions and thinking outside the box. I'm hardly willing to try new recipes let alone create my own. And this really irritates me. I especially want my daughter to grow up trying a variety of different things, because there are so many kids out there that just eat nothing but junk, and of course those bad habits don't suddenly change during adulthood. It's time to get those good eating habits into her now.

Speaking of which, we just tried the YoBaby Meals for the first time today at lunch, and they were a huge hit! Organic yogurt + organic fruit + organic veggies all mixed into one! Now that's a balanced meal. We tried the Peach & Squash variety. What I'm really interested in trying though is the Pears & Greenbeans. I couldn't find them at the store on my last visit, but I'm going to keep my eyes peeled!

Anyways... back to my lack of creativity in the kitchen. One of my tasks for my Day Zero Project is to expand my recipe collection with 30 new dinners. Today I am trying my first *new* creation:

The recipe I found is from Crock Pot. I received a pretty premium Crock Pot when we got married, and it's unfortunate that I've only used it a handful of times. Last year I bought a Crock Pot cook book and realized that you could pretty much cook dinner in your Crock Pot every single night if you wanted to. You can find the recipe online here, or I've also posted it below. Yum! Here's a picture of my peppers just starting to cook. As you can see, I only used 4 peppers instead of 6 because the ones that the grocery store had were enormous! The ideal sized pepper for this recipe is probably about the size of your fist. 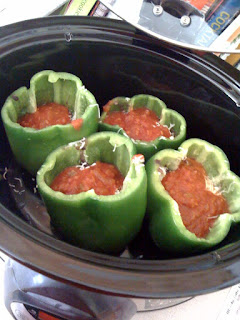 You don't want to fill the peppers all the way, because as cook they shrink down a bit (and this way it makes less mess).

And of course the best part is that the total prep time was only about 15 minutes, and my house gets to smell like yummy food all day while the Crock Pot does all the work!

1.In a medium skillet, saute the onion until golden. Season with the cayenne pepper, oregano, cumin and chili powder.
2.In a medium mixing bowl, mash half of the black beans with sauteed onions.
3.Mix in the remaining beans.
4.Place the bell peppers in the slow cooker, and spoon the black bean mixture into the bell peppers. Pour the salsa over the cheese.
5.Cover; cook on Low for 6 to 8 hours or on High for 3 to 4 hours.
6.Serve each pepper with a dollop of sour cream.

Update on Friday, August 27th: Yummy!!! This dish went over incredibly well at our household. In fact, my husband said that they were the BEST stuffed peppers that he's ever had.  No, I cannot verify how many times he's had stuffed peppers, but I know how to take a compliment when I get one! Once out of the Crock Pot, this is quite a messy dish, but served in a shallow bowl serves well as a Mexican style stew. I served it with tortilla chips, and ate most of it with a fork, but scooped up every last piece with the chips. Very, very good. Holly rating: 10 out of 10.

I should point out that I also left out the cumin, only because I realized I didn't have any until too late. I did not feel like the dish was missing anything.